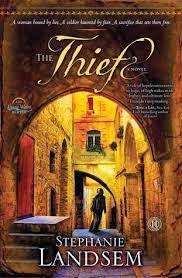 Most Christian fiction I have read has centred on characters that are prominent in the Old Testament. This is the first time that I read a whole novel based on the lives of characters who find only a brief mention in the Gospels. And yet, both these characters, the blind man who was healed by Jesus and the centurion who drops to his knees in front of the crucified Jesus, are pivotal and significant in their own way.

Nissa lives with her blind brother, Cedron, in a poor quarter of Jerusalem. She struggles to make enough money to pay the rent and keep them both fed. Her father is too fond of gambling, her mother of wine.

Mouse is a dirty boy, a thief whose petty spoils keep them going. Aided and tutored by Dismas, an experienced, older thief, Mouse keeps going. But Mouse is just Nissa by another name and guise. He is also Nissa’s most dangerous secret, one that could well get her stoned to death.

Longinus is a centurion who hates his time in Jerusalem, and longs for his hometown of Gaul. He makes it his mission to rid the marketplace of the thieves. When Nissa is caught by Longinus, she decides to give up stealing. But a hungry belly, the betrayal of her own parents and what she sees as the hard-heartedness of a God who won’t answer her brother’s faith force her back to a life of petty crime.

When Jesus heals Cedron of his blindness, the Sanhedrin are upset with Jesus for healing a blind man on the Sabbath.

The lives of Nissa and Longinus and many others get entangled with the story of Jesus. Ultimately, Jesus’ death and resurrection infuse the two with renewed hope and faith in a revolution that does not depend on war, and a God who is like no other.


Bit by bit, Stephanie shows us details about the lives of the characters. Before we know it, they have stepped off the pages of the book and into a film that plays out in our minds.

The best thing about Nissa is that she is plain and feisty, a woman of spirit and past marriageable age, my favourite combination. It is not a combination that is highly regarded in her time. To make matters worse, Nissa isn’t wife material. And she has no talents except for stealing.

What I liked about The Thief is that despite being generally a work of fiction, it is all too real. Both Nissa and Longinus are confronted by multiple antagonists. For Longinus, it is Silvanus, the chief centurion who longs to see him humiliated; Stephen, the Samaritan, who killed his best friend; Mouse, the thief that won’t get caught, and Death, the sceptre that stalks them all.

For Nissa, it is Longinus who has vowed to catch her thieving alter-ego, the voice inside her head that goads her into one more episode of petty thievery, Gilad, the landlord, whose rent they must pay or find themselves on the street, and her own parents with their addictions.

There are many contrasts here. Cedron’s faith versus Nissa’s lack of it, and ultimately the faith that Nissa tentatively begins to hold on to even as Cedron becomes disillusioned by the revolution that was not to be. Nissa, the Jew, and her struggle with her faith against Longinus, the soldier, and his openness in accepting the peace offered by the healer.

Stephanie has chosen two minor characters out of a New Testament teeming with bit roles, and used them to tell the story of the last days of Jesus. The man, who was blind from birth, and used to beg outside the temple, and was healed by Jesus. Now he has a life, a family and a sister who sets the tone for the unfolding of the story.

The pace of the chapters is perfect, alternating between the viewpoints of Longinus and Nissa, and leaving us at a crucial point in the story.

The events, as we know them in the Bible, move on in quick succession, and we are caught up in the tumult, as seen through the eyes of Nissa and Longinus and, to an extent, Cedron.

The love story grows in a slow and sedate fashion. The intensity and significance of marriage are emphasized as both Nissa and Longinus become willing to sacrifice all and give over everything they have and own into the keeping of the other. This desire on their part is expressive of God’s supreme sacrifice and His desire that we hand over everything we have to him.

Stephanie has also done a fantastic job of recreating the locale and the era of Jesus’ time. A smattering of Aramaic words across the narrative helps to make the story more real. The author has maintained a loyalty to the account of the Passion, as described in the Gospels, relying on her imagination to piece the rest together. In her skillful hands, the story comes alive.

The characters that populated the Gospels are here. The blind man who was healed, his parents who were called to give testimony about his congenital blindness, Dismas and Gestas, known in popular lore and literature as the Good Thief and the Bad Thief, Pontius Pilate, Joseph of Arimathea, the centurion who dropped to his knees and admitted that this was indeed the Son of God as Jesus breathed His last, Stephen, Simon of Cyrene and a host of other people.

Along with them are so many others that were born in Stephanie’s mind, but could well have existed in Jesus’ time, albeit by another name and with different life stories.

The baser instincts of people are evident here, through the instance of thieves and a murderer and many others who, through the depth of their sins, indicate their deep need of redemption.

This is a book that I would heartily recommend to everyone.


Thank you, Stephanie, for this treat of a story. I started reading it a day before Palm Sunday and finished it today, on Maundy Thursday. It was the perfect prelude to my Good Friday and Easter devotions.

(I got a Kindle version of this book from NetGalley.)