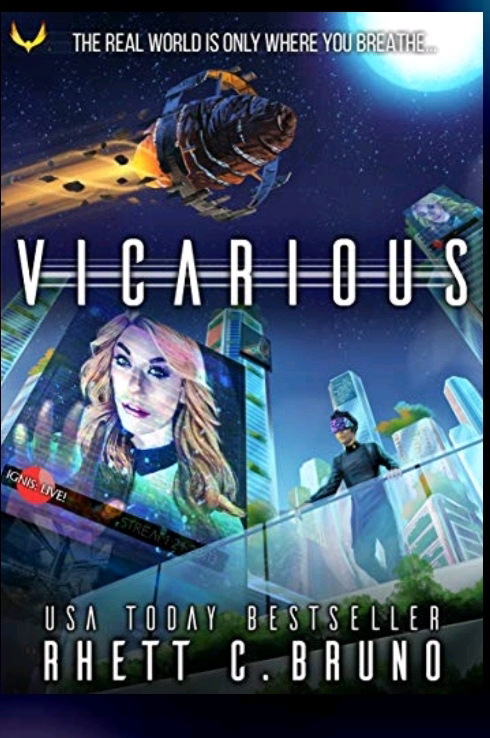 Vicarious is the story of two Dystopias posing as Utopias.

Asher Reinhart is born at age 10, after spending the first ten years in a cryogenic chamber acquiring the learning that will help him through life. The setting is a haven called High Earth, the only habitable portion of land left on earth in the 23rd century after a flood destroyed  the earth and a war, brought on by a techno-revolution, wiped out nearly all the humanity in the solar system.

In this new world, technology has made life so full of technological developments that one need never leave one’s smart dwelling. Not even for exercise, and certainly not to earn a living. It might seem like a dream-come-true for some, but within it, one gets an uneasy feeling as of a nightmare waiting to unfold.

In this world, digital entertainment, in terms of virtual reality, is everything. The most popular show is Ignis: Live, a reality show where human beings living on an interstellar ark are made to do extreme things, unaware that they are being filmed through tens of thousands of tiny advanced cameras hidden all over the ark.

When Asher is born, the first visuals he sees on the walls of his dwelling are those of Mission, a young girl, as old as him. Asher begins to watch Mission, to follow her life. He comes to know that Mission’s birth was as a result of what her Birthmother calls a “freak accident” while all the other births on Ignis are a result of the Birthmothers being assigned to give birth by the Collective.

The Collective is the force to fear. Falling in love and procreating are taboo, unless done with the permission of the Collective with the assigned person. Those caught breaking the rule are punished by being expelled into the void of space. Mission’s Birthmother hides her away under the floorboards because hers wasn’t an assigned birth.

Fifteen years later, 25-year-old Mission is chosen to be a BirthMother, and assigned to procreate with a member of the Collective, a man in his forties. For the 50th anniversary of the show, Craig Helix, the develop, decides to endanger Mission's life in order to boost show ratings. Asher, who is Chief Director of Content for the show, cannot get over his feelings for Mission, who is learning the perils of disobeying the Collective. Hé decides to influence the show. It is an action that has unimaginable consequences for both of them.

Slowly the structure and hierarchy of this new world becomes apparent to us. The people of Ignis think that the ark is on its way to a distant planet. Until they get there, resources must be optimised, and so the population must be kept in check. Only 10000 people to ensure that there is no strain on the resources.

I don’t usually read sci-fi, and this one took some getting used to.

The viewpoint shifts seamlessly from Asher’s first person past tense to Mission’s third person past tense account. The choice of perspective is appropriate, given that Asher is watching her, while she has no idea that she and her fellow residents are being watched.

There is a streak of rebellion in Mission, in complete contrast to Asher, who falls in line with the rules of his new world without questioning it. At least in the beginning.

Still I liked Asher as a character far more than Mission. I liked Mission only when she declaimed, Countless perfect-looking people wandering aimlessly around in a perfect city in a perfect world. I’d rather have been under the floor.

Both are very emotional, and complete misfits in the world they find themselves in.

A projected Utopia, Ignis is decidedly dystopian from the viewpoint of Mission, who lives it. High Earth is no different. On High Earth, residents are called to enjoy the fruits of technology and entertainment without questioning anything. Those that do are sent to the terrible outskirts.

I loved the author’s worldbuilding. As a world, the details are interesting and intriguing. The amount of detail that the author has put into conjuring up this world is astounding.

On High Earth, the invention of the molecular re-assembly has made war, struggle, the need for family, exploration, and so much more obsolete. Technology enables selective memories to be wiped out. Data is the currency. Family is an outdated concept. Residents spend their early formative years in a synth-womb from which they emerge at age 10 or later, with an artificial intelligence, VORA, for company.

On Ignis, food is slop made of blended bugs and flora. Birthmothers must mate with the partner selected for them.

There was just one error. In Chapter 20, Virgil suddenly turned into Virgo.

Beneath it all, there are lessons that we can learn. Vicarious is a morality tale that warns us about the perils of humans attempting to play God, about the over-reliance on technology and a call to simplicity, about the need to be ourselves in a world in which it is so easy to pretend to be something else and about the beauty of the earth and the significance of humanity amid the chaos. This was a worthwhile read in the pandemic.

Posted by Cynthia Rodrigues Manchekar at Tuesday, May 18, 2021 No comments:

Book Review: Something So Beautiful 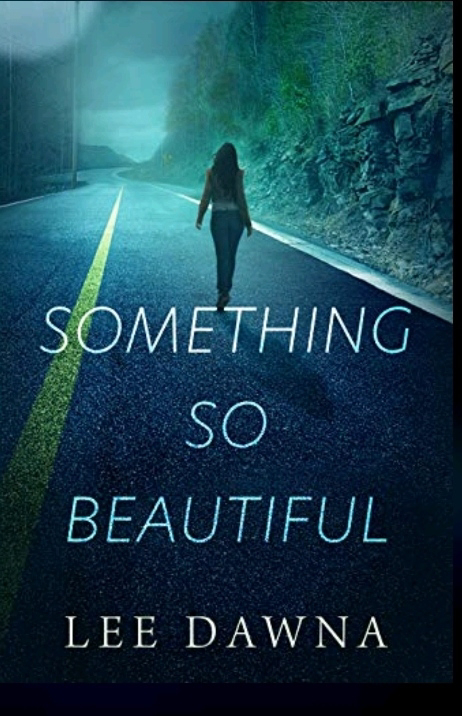 Title: Something So Beautiful
Author: Lee Dawna
Pages: 334
Publisher: Lee Dawna Books, Inc
My GoodReads Rating: ⭐⭐⭐
Thirty-two-year-old widow Mary Willams has had a hard life. Having lost her mother when she was just nine, she was abandoned by her father a mere six months later. Since then Mary has made her own way in life.
After the death of her husband, Mary withdraws into herself. That is when her childhood best friend Kim and her husband, Kevin, convince her to go on a double date (a blind date) with one of Kevin's friends, John Beller.
Meanwhile, Mary is suffering delusions and acute paranoia. She hears footsteps when there's no one at home and receives calls with no one on the other end of the line. She wonders if she is losing her mind and worries that her intuition is malfunctioning. It is not the right mindset with which to begin a new relationship. But John ís completely besotted by her, is a man driven ín his desire to woo and win her. Slowly Mary gives in to John's persistence.
Returning from a date at John's house, Mary's car is driven off the road by an insane driver. John finds her and takes her home after she is discharged from the hospital. But will she be safe in John's house, or will danger find her anyway?
The story is written mostly in the first person present tense PoV of Mary and briefly in the first person present tense PoV of John. Each chapter ends not exactly on a cliffhanger, but certainly prodding you to read the next one. The chapters are short, even so at 136, there are far too many. I thought the book would have done better if it had been slashed around the middle.
The parts that show Mary's weakening grasp on reality were well written. There was more than a hint on Gothic suspense about them,  and I wish there had been more of that. Instead, what we got was the insipid romance between John and Mary. A woman who finds herself falling for a man she knows nothing about, even as he proceeds to dig into her past and ferret out all the secrets she holds.
I didn't like Kim very much. She doesn't offer Mary the support she needs and is dismissive of her fears. It is better to not have a friend, than to have one like her.
I found John extremely overbearing. He was very possesive and seemed to think his wealth and other talents were more than enough for the two of them. It was almost as if he felt he owned her. He presumed to speak on behalf of Mary, never letting her make up her mind. Whether his intentions are honourable or not , I didn't appreciate his effort to bulldoze his way into her life. Definitely a red flag there.
I was grateful to his mother, Katherine, and sister, Shiela, for objecting to his behavior. I agreed with them, the relationship was smothering. Mary certainly seemed to be utterly charmed by him.
Chapter 101 had some typos.
This book would have benefited with less of John and more of Mary's delusions.
(I read this book through NetGalley. Thank you to the author, the publisher and NetGalley)
Posted by Cynthia Rodrigues Manchekar at Wednesday, May 12, 2021 No comments: