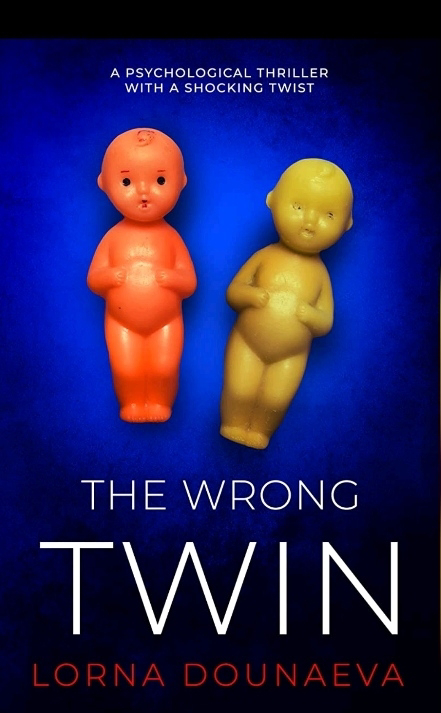 Mel is returning home to England. Her marriage of 20 years with husband Peter in Australia has broken down and she intends to file for divorce. The marriage has succumbed to lack of effort on the part of both. Also, Peter’s patronizing attitude and his know-it-all behaviour has begun to grate on her nerves and she wants out.

But home, she realizes, is different. With the death of their parents seven years ago, twin sister Abbie, is all she has, but her sister, once outgoing, friendly and fashionable, is now hostile, with completely different TV viewing and eating habits and a whole new personality. Then there is a strange man who breaks into the house when Mel is alone and follows her around town.

It appears that Mel’s happy homecoming is crumbling around her. Soon she finds out that she has far more to worry about than Peter’s behaviour and Abbie’s odd moodiness.

The title of the book was perfect. The book cleverly brings out the old nature versus nurture debate.

The Prologue lets us in on the murder of a girl, and the manner in which her body is disposed of, never to be found again.

The narrative brings scenes to life. The descriptions bring to us just the right mix of action and setting to guide us along.

The author doesn’t let Mel think about her marriage much. This lack of information caused me to think, at first, that Mel had made a hasty decision, but once Peter arrived on the scene, we see what she finds troubling about his attitude, and it causes us to warm slightly more towards her. We see a display of his attitude when he tells the security guard at a hotel where he is staying, “I’ll deal with her.”

For nearly three-fifths of the book, I neither liked nor disliked Mel. I felt indifferent towards her. There was just too much information about her work, the shopping she did for the house and other by-the-way stuff. It was only when the pace of the novel picked up that I felt the slightest feeling of concern towards her.

The pace of the novel was slow, with not much happening. The only thing that the author drives on relentlessly about is a game known as The Artful Assassin whose bugs Mel, a game developer, is trying hard to fix.

I rarely give up on a book and so I plodded on. The reward came at the 69 percent mark, which is way too late. Most readers don’t have that kind of patience.

What made the action sweeter was that it was on the lines of something that I had suspected all along. But the manner in which it was executed still took me by surprise. The mystery, though late to come by, was a good one. The unexpected twist at the end of the book left me wanting more. I hope the author will write a Book 2 to let us in on what happens next.

The bugs in The Artful Assassin haven’t been fixed yet. And perhaps that marriage could do with some fixing too.