Book Review: SHERLOCK HOLMES AND THE RIPPER OF WHITECHAPEL 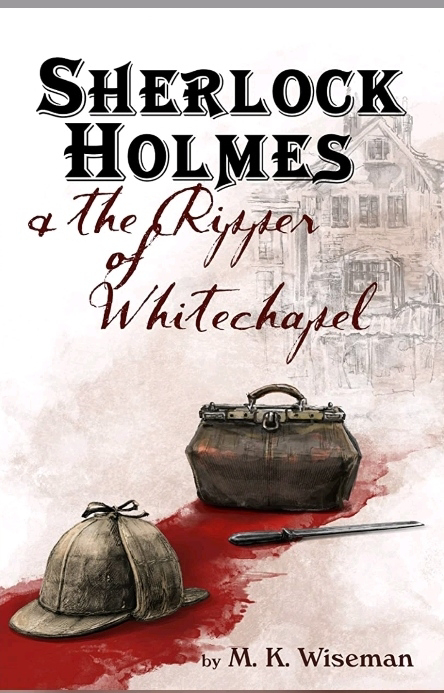 Title: Sherlock Holmes and the Ripper of Whitechapel
Author: MK Wiseman
Pages: 214
Publisher: Megan Wiseman
My GoodReads Rating: ⭐⭐⭐
When you read a new book by an unknown author in the voice of a beloved character, it’s natural to feel some hesitation and a mild sense of alarm at what might ensue but this author has picked up the style so beautifully that you hardly notice any difference between Sherlock Holmes and the Ripper of Whitechapel by MK Wiseman and any of the books written by Arthur Conan Doyle.

The only difference is that instead of Dr Watson being the chronicler, here it is Holmes himself playing that role.

And for good reason too. Dr Watson is now married to Miss Mary Morstan, who was Holmes’ client in The Sign of the Four. The good doctor has now settled in peaceful domesticity with her, while being occupied with managing his practice. Consequently he has had no time to visit his former rooms or his friend, since his marriage. The friendship has also been frayed with Dr Watson’s publication of one of Holmes’ cases, A Study in Scarlet, in the Christmas edition of Beeton’s Chronicle.

The story begins with Charles Warren, Commissioner of the Metropolitan Police, appealing to Holmes for help. Two women have already died at the hands of a brutal killer, named Jack the Ripper, and now a third body has been found. A message left behind by the killer at the scene of the crime declares, {Five done. Fifteen more and I give myself up.]

The bestiality with which the women are killed and mutilated makes the prospect of more killings even more horrific, and Holmes is anxious to solve the mystery. But this challenge proves to be one of the most difficult challenges of his career, especially since the suspicion falls squarely on his dear friend, Dr Watson.

The author has preserved the character of Sherlock Holmes in the universe of 221 Baker Street along with the other characters and setting so beloved around the world. In this book, the author has combined the myth of Sherlock Holmes with serial killings that have been the subject of so much fiction as to seem almost mythical. The book ends with the Adventure of the Blue Carbuncle, which is incidentally the first story I read from the canon of Arthur Conan Doyle.

The book consists of the usual cast of characters, including Inspector Lestrade, Mary Watson nee Morstan, and the Baker Street irregulars led by Billy Wiggins.

The murders are all gruesome but it does not make for squeamish reading because of the language of the late 19th century in which it is couched.

The deductive clues that Sherlock Holmes used to enthrall us with, over a century before his time, now have a name in police circles: Profiling, and the author uses the word.

Also, in this book, Holmes has had the time and the inclination to call out his own egoism vis-à-vis Dr Watson and to admit the significance of the human element in deduction.

Unfortunately, despite the flourishing literary style, I found that Holmes wasn’t his usual self here. The deductive skills that used to wow us in Doyle’s canon are missing here. The only evidence we see of his deductive skills is how he gauges the height of the Ripper based on the height from the ground at which the writing has been found. A reasoning we first read in Doyle’s work.

The middle of the book is plagued with doubts and fears, and the investigation picks up pace only around the 80 percent mark.

(I read this book through Edelweiss. Thank you to the author, the publisher and Edelweiss.)