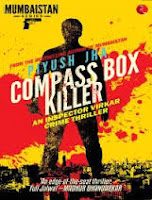 
Compass Box Killer by Piyush Jha, the first of the Inspector Virkar Crime Thrillers and part of the Mumbaistan series, is a slickly written story that is marked with enough twists and turns to keep you guessing, making for an engaging read.

In typical Hindi potboiler fashion, Jha introduces his leading man, Inspector Virkar, as a swashbuckling cop, who is not afraid to toss the rule book out of the window, when required, in order to get results.

Compass Box Killer is about a killer, named with the typical flair that the television news media displays for labeling police cases and pigeonholing other people’s tragedies.

In a remarkable deviation from other works of its kind, Jha lets you into the novel from the murderer’s side of the story. Or rather from the viewpoint of the soon-to-be murderer.

It all starts with the murder of Senior Inspector Tukaram Akurle. Virkar, who is assigned the case, finds an old geometry instrument box, colloquially known among students in india as a compass box. The box reveals a chit of paper with a message written by the killer, telling Virkar that if he wants to know the identity of the next victim, he must find him first.

Virkar manages to find the room that the killer shares with many others, but his quarry has flown the coop. A search of the killer’s few belongings reveals another compass box, with a chit naming the next victim.

Virkar’s attempts to provide special protection to the four Dr Prabhat Bhandaris found is rejected by his seniors, enabling the killer to strike Dr Bhandari successfully. Strangely, as the bodies pile up, the murderer always informs Virkar about the identity of his next victim. Is it over-confidence that causes the killer to keep Virkar informed? Or something else?

Along the way, Raashi Hunerwal, ambitious crime reporter from CrimeNews channel, joins forces with Virkar, seemingly anxious to make amends for having mocked him on her TV programme earlier.

As Virkar begins to join the dots, connecting the murder victims, in an investigation that takes him from Mumbai to Khandala and Belgaum in a high-adrenaline drama, that this killer is no ordinary serial killer. And the murders are the tip of a secret cover-up.

Jha is a master of realistic description. His description of the puke-ridden death of Senior Inspector Akurle was enough to cause my stomach to churn. I had to shut the book at this point, and it was some time before I could take it up again, and that too by skimming the paragraph and quickly jumping to the next.

At first, Raashi seems a typical specimen of her ilk, stopping at nothing in her bid to get Breaking News, and even ridiculing Virkar for his refusal to talk to her. But his attempts to save the life of NGO activist and lawyer Nigel Colasco, change her mind and she becomes sympathetic towards him. Or so it seems.

The best part of Compass Box Killer is the delineation of the character of Virkar. The inspector is very real, not some romanticized version of a hero. He belches, is uncomfortable with cutlery and, in Jha’s characterisation, stays true to his roots. What makes him extremely interesting and fascinating as a character is the fact that he once considered being a part of a petty gang himself, before better sense prevailed.

I must make a special note of the very colourful proverbs and phrases that Virkar uses to cleverly sum up his situation. A few like Na jaal, na jhinga, par dariya mein khas-khas, I had not even heard of. Jha has effortlessly peppered his narrative with local turns of phrases that add a unique flavor and pungency to Compass Box Killer. They make the dialogue crackle with life. You can actually imagine the Hindi lines that the actors will speak once this book is translated to the big screen.

The only thing that plays spoilsport to this otherwise great desi thriller is the poor editing and proofing. There are a number of errors scattered through the pages that a careful editor could have avoided. Even the names of the characters have suffered in one or two places. Akurle becomes Akrule in one place, and Virkar loses the first 'r' in his name. Sheer carelessness!

These errors aside, Jha also does a fine job of representing the news media in the shape of the attractive Raashi Hunerwal. While the media has the potential to be a watchdog, more often than not, it is to be found essaying the role of a mangy stray that won’t stop annoying and growling at those around it.

In spite of showing the killer’s actions in real time, Jha never loses his hold on the reader’s interest. Inspector Virkar and Nandu, the killer, play a game of cat and mouse. The stakes are high, and it seems that where Virkar is dogged and wily, Nandu is ruthless.

Dimaag ka dahi means the curdling of the brains and poor Virkar faces a lot of that, from all his antagonists in the story. Jha’s writing is pithy and gritty. Despite knowing the identity of the killer, we are drawn along by the desire to learn about the motivation for his blood thirst.

I look forward to the next in the Mumbaistan series.