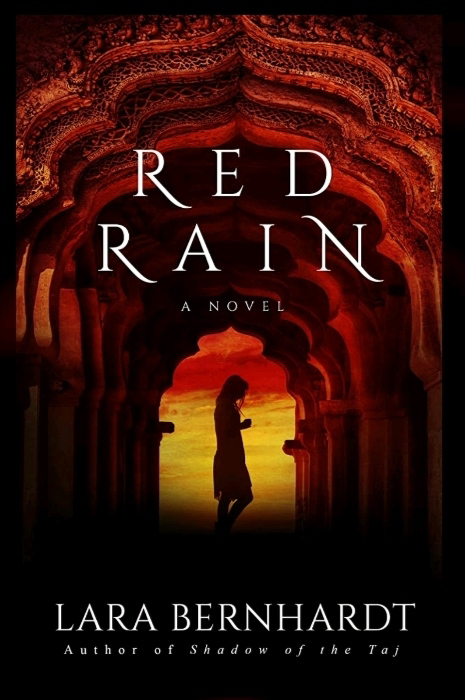 Brace yourself, people, this is going to be a long one.

Olivia Montag, with a dead baby and a broken marriage behind her, flees to India from the US to escape her sadness. Flush with the promise of Eat, Pray, Love, she seeks to re-invent her life by volunteering as an English teacher in a school for the underprivileged in a village in Kochi, Kerala.

She begins to enjoy teaching, but then realises that as girls begin to menstruate, they are pulled out of school for lack of sanitary napkins and on account of prevailing superstitions. When she meets Mukesh, a man who has invented a machine to produce low-cost sanitary napkins, she is blown by its potential to create positive change and offers to buy the machines and help him set up a production unit in the village. But the going will not be easy.

Will Olivia give up in the face of opposition? Or will she stand up for the girls? And will she be able to get this crazy enterprise to work?

The book, written in the 3rd person past tense PoV of Olivia, starts out with the right intentions. Olivia has the desire to do good, and the author wants to highlight the ills that prevail Indian society. A lot of the stuff she talks about is real, dowry problems, the desire for a male child, the superstitions associated with menstruation etc, all stem from a patriarchal mindset that pervades social customs. A lot of women do not have much agency when it comes to making decisions for themselves.

The hero of this book is Mukesh, based on the life of Arunachalam Muruganantham, who actually did everything that is attributed to Mukesh here. If you want to know more about this real-life hero, look him up on YouTube or watch his brilliant Ted Talk.

Olivia is a character whose heart is in the right place. Her self-esteem has taken a beating and we see the development in her character arc. I also liked the fact that the focus remained firmly on her, and the romance wasn’t forced on us.

On the flip side, the other teachers remained flat. When they were gathered together, it was hard to tell who was talking. Of the minor characters, Olivia’s fellow teachers, only Aubra stood out for her jealousy, Chris for his helpfulness towards Olivia, and Watisha for how she counsels Olivia. Melanie and Delilah don’t stand out at all. Delilah quotes from books, but that has no impact whatsoever.

The prose was rather too simple and repetitive, especially when it came to Olivia’s past memories of her ex-husband, Scott.

Early on, Olivia watches flocks of green parrots flying overhead in Delhi of all places. People have lived and died in Delhi without seeing the sight that Olivia sees. Clearly the author’s research has been pathetic.

When Olivia first meets Chris, he palms off some coins to a taxi driver who is trying to extort money from Olivia under false pretences. When she protests, Chris mouths crap about “the severe poverty some of the people in this country grapple with, and the number who go hungry every day.” I wanted to reach into the page and slap his sanctimonious spirit right off his face.

The white man saving the brown skinned children from starvation with a few coins. Saviour complex much?

Incidentally, Chris’ heart bleeds for the dishonest taxi driver and his children, but with the vendors in the shops, he haggles, instead of paying the price they ask. Why? Don’t the vendors have kids that might be starving?

Then we have Olivia, who is stupid enough to fly halfway across the world to a country she has, like the author, done zero research on.

She sees “bare-chested women scrubbing clothing against rocks in a putrid gray-brown river.” The same river in which she sees “a dead carcass float by,” lest you assume the carcass is alive.

Incidentally, Kochi, the city in which this book is set, is in Kerala, the state with the highest performance on several indices such as health, education, literacy, law and order, public welfare etc. Again, zero research. The basic premise of the book, girls being pulled out of school once they began menstruating, would not apply to Kerala. It is the height of ridiculousness to suggest that Kochi doesn’t have good sanitary pads.

Zero research on descriptions. Olivia tells us there are “tropical trees surrounding the school on all sides.” Tropical trees in a tropical country. Who would have guessed?

The whole thing about women not driving is another example of lack of research. Not everyone drives in India. That’s because cars are expensive, and not everyone can afford to buy one, but it’s also because the public transportation system is reliable and cost-effective and serves people’s needs well. A vehicle of one’s own isn’t a priority.

One of the characters, a British woman named Aubra, says, “This culture doesn’t accept women drivers. People would shout at us. Other drivers would be aggressive and maybe even try to run us off the road.” What bull crap! This is an example of reputation maligning.

There were around 429 thousand driving licenses issued among females across the Indian state of Kerala in fiscal year 2019, the highest in India. The total newly issued driving licenses in Kerala was over 10.5 million that year, out of which 14.9 percent were for women. Where did the author come up with the stupid information that she forced into Aubra’s mouth?

The teachers talk about taking a tuk-tuk. The right word, used everywhere in India, is autorickshaw. Tuk-tuk is what these vehicles are called in Thailand.

The food suffers in a similar fashion. Ms Vanya’s culinary skills never produced idli, dosa or sambar, the most well-known foods in South Indian cuisine and the staple diet of people there. Instead the narrative only mentions bland cauliflower, peas and potatoes cooked together, along with rice, dal and chapatis. Indian food is known for its diversity; these poor characters have been shortchanged. Again, meat isn’t “less readily available,” in India, least of all in Kerala which loves its beef.

Exposing one’s legs would be frowned on in rural areas, but it wouldn’t be “completely taboo.”

In one scene, where Olivia is trying to put together a first aid kit, we are told that Indians don’t understand the word, bandages. Ms Bernhardt, India has one of the largest populations of non-native English speakers anywhere. This scene is ridiculous.

A minor character, Rahul, we are told, “laced his fingers across the paunch beneath his ample shalwar.” The right word is kameez, which means tunic. Shalwar stands for the loose pants worn as part of an ensemble. Also, men in Kerala wear the lungi at home. The shalwar kameez is worn by North Indians.

I can understand the culture shock but the false information is annoying. The very title, Red Rain, was forced. It had no direct link with the main plot. I suspect it was included to highlight the menstruation angle.

All in all, not a book that deserves to be recommended.