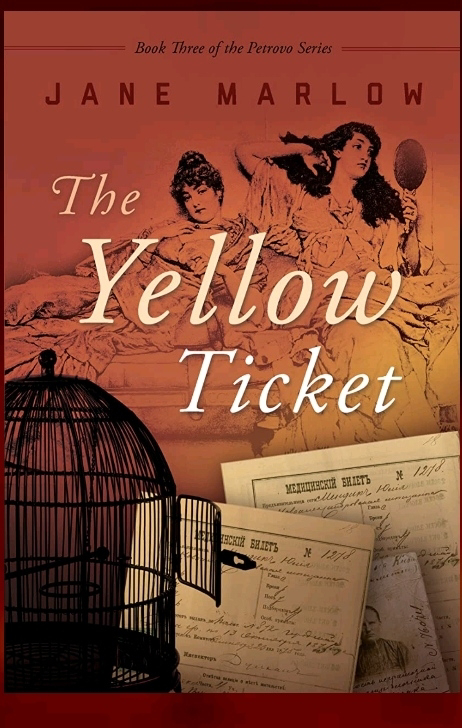 This was the first story I have read, that was written from the viewpoint of a prostitute.

Set in Russia, we meet Anna Vorontsova in September 1867 in the household of Nikolai O Shelgunov, where she is a servant. Her sole recourse are her few good memories from her childhood back home in Petrovo, before she was taken advantage of by a boy who she thought loved her, and sent away at age 15 to work in the Shelgunov household and hide her disgrace, never more to return home.

Now sexually abused and raped by her master, Anna is fired when her mistress comes to know. The unemployed Anna first seeks employment as a housekeeper, but gives it up when she is told by her employer that her duties include the offering of sexual favours.

Seeking to rid her mind of her horrible situation, she goes out for a walk and is accosted by Officer Shestov who, after a futile attempt at raping her, arrests her for soliciting without having a Yellow Ticket. The Yellow Ticket is the document that legalises prostitution.

She is rescued from jail, thanks to Irina, a prostitute she meets in jail, and gets a job at the brothel of Madam Sophia Mikhailovna. Over the next five years, we are right with Anna as she contracts a venereal disease and loses her place in the brothel, the highs and lows of her life as she services clients. We encounter the loves and friendships of her life and witness her joys and heartbreaks.

Anna fulfils the needs of many clients. But three of these men mean more to her than the others, offering her a semblance of friendship and companionship, and endeavouring to raise her prospects.

Yevgeny Ilyich is a 50-year-old client who teaches her to question, contemplate and think. He opens her mind to the ills that plague the lives of peasants. A nihilist, he dreams of revolution. He believes, [Ideas aren’t allowed in Russia.] But there’s a bit of a nihilist in Anna too, as she strives to save the world, when her own life is tragically in need of saving.

The married banker Abram Abramovich Segalovich makes her piteous circumstances bearable by offering her his love.

The young physically challenged actuary, Peter, teaches Anna how to work with numbers, do complex calculations and keep accounts, paving the way for a career beyond the brothel.

With their help, will Anna make a new life for herself? Or will she end up paying a heavy price for the Yellow Ticket?

The story is written in the first person present tense point of view of Anna. The book is a mix of humour, pathos and sorrow in equal measure. We see the bittersweet moments in the lives of Anna and her fellow-prostitutes, the risks and dangers of their work.

The characters all make a place for themselves in our hearts. Besides Anna, we have Madam Sophia, Grisha, the big bouncer who offers security to the brothel, the other girls, including Dunyasha, Dimka, and even Fyedka. All of them are struggling to do their best in a century in which there are so many challenges, and people do what they can to survive. They are all victims of their circumstances, and yet all of them, particularly Anna, defy cliché to emerge as individuals.

Even Sophia Mikhailovna in not reduced to being a madame with a heart of gold. In the end, they all take the decisions they see fitting to meet the circumstances that have been thrust on them.

It is sad to see that nearly every individual in authority seeks to impose upon Anna and take advantage of her. It is the same with the other prostitutes. The difficulties faced by women, already second class citizens, are magnified in the case of the prostitutes who stand at the bottom of society’s ladder, looked down upon by everyone. They are objects of derision and scorn, never able to better their lot.

Anna is a mix of naivete and worldly wisdom. She understands her limitations and her humour is self-deprecating. Beneath the light tone of the book, there is an overwhelming note of sadness at the soul-crushing drudgery of the sexual act stripped of emotion and love, exposed to sexual diseases and the fear of pregnancy. Anna tells herself, Nice women do this. To survive. She wants to save money and go back home to her village.

The language is sometimes not in keeping with what one might expect of a work of historical fiction. Words like ‘upchucks’ for vomiting and other North American slang stood out in the setting. But it lent the narrative a light touch, reminding us not to judge the lives of these women too harshly.

Another thing I liked was how the author set to root this work of historical fiction by dropping some true names such as author Dostoevsky and satirist Mikhail Saltykov Shchedrin.

The author does an incredible job of evoking the period. The abysmal condition of medicine then, the absence of condoms, mercury being administered as a medicine against sexual diseases of any kind.

Minor quibbles: Anna, being uneducated, tells us that she cannot understand big words. But at one time, she uses the word, renegade, with the right meaning.

(I read this book through NetGalley. Thank you to the author, the publisher and NetGalley)
Posted by Cynthia Rodrigues Manchekar at Friday, July 23, 2021