Book Review: THE UPSTAIRS WIFE: AN INTIMATE HISTORY OF PAKISTAN 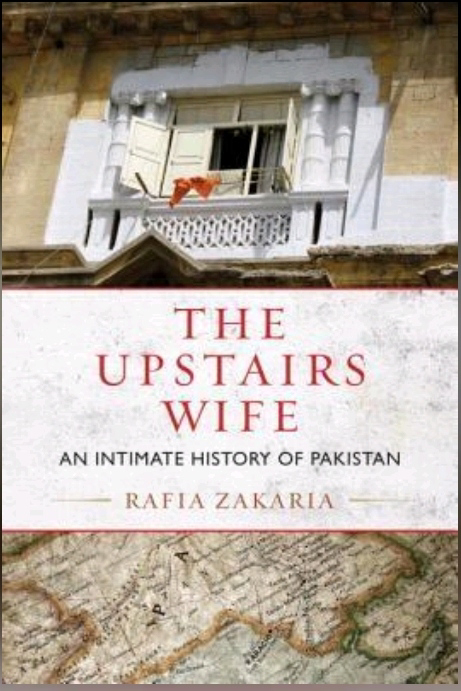 Title: The Upstairs Wife: An Intimate History of Pakistan

This book, with a tagline, An Intimate History of Pakistan, aims to catch one family, the Zakarias, at a moment that is both private and public. It is a moment that pertains to them as a nation, as well as at a deeply personal level.

On December 27, 2007, Benazir Bhutto was assassinated, plunging Pakistan into turmoil and aggravating the chaos in the life of one family. On the same day, the author’s uncle, husband of her father’s sister, Aunt Amina, was rushed into surgery after suffering a sudden stroke. Uncle Sohail survives and Benazir dies. These two events alter the personal history of the Zakarias and the history of the nation respectively.

The assassination of Benazir is the opportunity for the hardliners in Pakistan to take charge, impacting the state of women’s rights in that country.

But this is not the first time, the personal and the public have come together for the Zakarias. Much earlier in April 1986, Benazir Bhutto had returned to Karachi after a 7-year self-imposed exile, following the imposition of martial law by General Zia-Ul-Haq and the execution of her father, Zulfikar Ali Bhutto.

Parallelly, one morning in December 1986, Aunt Amina had rushed into the Zakaria home, her life in disarray, with the news that Sohail, frustrated with his wife’s inability to conceive, planned to take on a second wife, one of his colleagues, with whom he had fallen in love. It is the most ordinary of days that enclose tragedy within their sealed lips. Ironically, the second wife isn’t able to conceive either.

The author, a dangler on the edges of adult conversations, as all writers must be, guesses rightly that married women do not spend the night at their maternal home.

Sohail adds another floor to the house, moving his first wife upstairs, out of sight, where she becomes a pariah, spying on the happenings below. Aunt Amina is the Upstairs Wife. I felt her pain and sadness. In many ways, it is the pain of the deserving being cheated of their rights.

As one person dies and another survives, author Rafia wonders about the nature of prayer, how their prayers were granted but their fervent prayers, decades ago, that her aunt may conceive were denied.

As the narrative interweaves the past and the present together, we read about the volatile events in Pakistani history as well as the less violent but still momentous events in Aunt Amina’s life. As history unfolds through the eyes of the author as a child, she comes of age, having deeply absorbed and understood the weaknesses, hopes and errors of a fledgling nation.

The family history is intertwined with social and political history. We see the births of the key members of the Zakaria family, from Abdulla, Rafia’s father, to Amina, her aunt, and the family’s immigration to the newly-born Pakistan. Slowly they begin to settle down, trying to live their lives against the backdrop of larger-than-life events such as the division of Pakistan’s West and East, and the wars against India.

Their hope of a better life among Muslims is scuttled as India-born immigrants are viewed with suspicion and hostility. Later as the country vigorously adopts Sharia law and gets increasingly Islamized, we read about how women often get short shrift, how the First Lady was instrumental in forging a law that a Pakistani Muslim man not be allowed to take a second wife without the permission of the first wife.

The events in the book happen in Karachi, in Pakistan, but they might as well have happened in India. The very first sentence tells us about the tendency to leave barred windows ajar, the sounds of children playing, hawkers advertising their wares, car horns blaring, exhaust fumes blending with cooking smells painting a picture of small town and big city life that would be perfectly at home anywhere in India. There were so many cultural resonances despite the different faiths and cultures.

I liked how in their innocence the kids agree that they never liked Uncle Sohail before, but now they hate him.

The writing is beautiful, conjuring up a world of images that is at once exotic and familiar. My mother’s wide smiling mouth gathered into an uncertain tightness, as if pulled by a drawstring.

A lane of houses all mismatched in height is described as The awkwardness of a group of mismatched cousins pushed together in a hurried family portrait.

Two of the four stars that I have awarded are for the beautiful prose.

But the lack of a cohesiveness that binds the parallel strains gets in the way of us feeling totally invested. The history of the nation and the family are presented simultaneously, but the connection between them is tenuous at best, and sometimes there is no connection at all.

(I read this book on Edelweiss. Thank you to the author, the publisher and Edelweiss.)