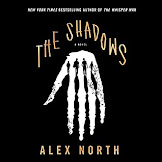 The Shadows was my second experience with an audiobook. The premise of the book sounded intriguing. I also found the book cover impressive. It showed a bony hand with the spaces between the fingers appearing to be shadows.

The book starts with the Prologue, when the first-person narrator, Paul Adams, was just a 15-year-old schoolboy. It was the time when an unspeakable tragedy took place, a crime that a classmate, Charlie Crabtree, was responsible for. Back then, Paul’s mother, Daphne, stood firmly on his side. Soon after the crime, Paul left their village to pursue higher studies.

Back in the past, the closure of their local school had forced Paul and his best friend, James Dawson, to join a school in the next town. There they were befriended by Charlie and his sidekick, Billy Roberts. But while Paul refused to be enamoured with Charlie’s mysterious behaviour and his suggestions regarding lucid dreaming and the power to make one’s dreams real, James was completely taken in.

Charlie’s idea of lucid dreaming suggested that he had the ability to take control of his dreams to commit any crime for the sake of pleasing a shadowy master.

This is how the authorial voice describes dreams: Our subconscious takes everyday experiences and shatters them on the floor like a vase, then picks up a handful of pieces to form something random and new to show us while we sleep. We might recognise a few fragments by they’re joined together oddly and separated by strange cracks. Dreams are a patchwork stitched together from the things that happen to us in our waking lives…Our lives can be changed by the dreams we have had.

Paul sought to dissociate himself from Charlie and from James’ hero-worship of Charlie, choosing to spend time with Jenny, a classmate who becomes his first love, but Charlie wasn’t about to let him off easily.

In the present, Detective Amanda Beck is in charge of an investigation where two teenagers have killed a classmate, stabbing him brutally. The scene of the crime is horrific, with hundreds of red palmprints covering the rocks there. The two teenage killers, soaked in blood, surrender to the police. Each is found with a knife and a diary in which they have detailed near identical accounts of how they set about killing the boy.

The awareness that this is a copycat crime leads Amanda to search the recesses of the dark net to find more information on the crime that had inspired this one. The crime where Charlie and his accomplice stabbed an innocent classmate and left tell-tale red palmprints at the scene of the crime. One of the killers, Billy, was found with a knife and his dream diary. But Charlie himself disappeared.

Subsequent searches failed to yield any clue as to his whereabouts. Billy went on to serve jailtime.

For Paul, who has returned to the village after 25 years to see his mother, who is dying of dementia, it seems as if the horror is back. What’s worse, it seems his mother knows more about the crime than he thought. Will Paul know the truth before it is too late?

The chapters are written in the first person PoV of Paul, then and now, and in the third-person PoV of Amanda. The chapters flip back and forth between the two perspectives and the two timelines.

This book is the second of Amanda’s series, so we get to hear quite a bit about her background, the fact that she is the daughter of a cop and how she tries and fails to forget the horrors she has seen.

The author does a great job of creating an aura around Charlie. Though still a teenager, Charlie is like nothing that Paul and James had ever encountered before. There is a sense of danger and tension around him. The author gives us a foretaste of his malevolence the very first time we, and Paul, come across him. We become aware of the evil that he is capable of.

I’d picked up the book because the plot had intrigued me, but I wasn’t satisfied with the story or with the ending. Also, the writing was peppered with a lot of swearing, which I find annoying.

Both the voice artistes, John Heffernan and Hannah Arterton, were good. John has the added advantage of having a first-person perspective to narrate, which enabled him to put in the right inflections to suggest emotion. His voice, diction and pronunciation all helped us hear Paul’s expressions. This was an advantage that Hannah lost out on as she was narrating a third-person account. Also, her voice seemed to go a little too fast. An adjustment of the speed didn’t help.

(I read this book through NetGalley.)