Book Review: HIS AND HERS 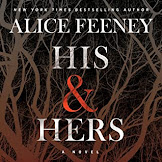 A BBC TV news presenter, Anna Andrews has come up in life. Hailing from a deprived background, her father deserted the family, leaving her mother to clean homes in the village to earn a living. Her job and the success that is hers means a lot to her.

Having spent long years as a correspondent, Anna gets the opportunity to present the afternoon news after Cat Jones, the actual presenter, goes off suddenly on maternity leave. Two years later, when Anna expects her contract to be renewed, she finds herself suddenly relegated to the position of news correspondent when Cat returns.

A day later, she is called back to work because Cat is unreachable. When she shows up to work at the request of the Thin Controller, she finds Cat already there.

It is Cat who suggests that Anna head to the village of Blackdown, her hometown, where there has been a murder.

Detective Chief Inspector Jack Harper and his assistant Priya Patel are called to the scene of a brutal murder. A local woman, Rachel Hopkins, has been killed in the woods. The principal of the local girl’s school, Helen Wang, is found brutally murdered the following day, and Zoe Harper, another local woman, who also happened to be Jack’s sister, is found brutally murdered the day after. Will Jack be able to solve the case or will the body count rise again?

Both Anna and Jack have had a close association with the characters in the case and everything seems to point towards them. Jack stands in danger of becoming a suspect in his own murder investigation, having been the last to see Rachel for a sexual fling.

The story comes to us in three voices, hers (the PoV of Anna Andrews) and his (that of Jack Harper) in alternate chapters and both accounts hold secrets. That they were once married becomes known to us soon enough. They have been estranged since the death of their baby girl, Charlotte, at just three months of age. They have been divorced since then.

Both accounts go heavy on the foreshadowing and so my expectations were quite high. Both characters face thwarted ambitions. Both the leading characters have a lot in common. Both have had casual sex. Both their jobs carry enormous stress, and expose them to ugly things that cannot be unseen. Both had guilty secrets they had to hide, secrets dating back to their pasts.

The PoVs of Anna and Jack are broken occasionally by the voice of the unidentified murderer, which was extremely creepy. The artiste has probably used some software to disguise the voice, but the effect was quite horrible. The voice actually grated on my ears.

The quotes, generalisations of truth that apply to all of us, are numerous and I enjoyed them. Anna’s back story comes out well.

The murderer tells us, There is a version of me I can only ever be with myself. It’s a point that hits us only after the identity of this person is revealed.

Both Anna and Jack get to mouth some good lines. Sample these:

Anna: We rarely deserve the lives we lead. We pay for them, however we can, be it with money, guilt or regret.

I’m pretty good at being the version of myself people want me to be.

It’s easier to blame the miles for the distance that exists between some parents and their children. When you bend the truth too far, it tends to break.

Like ghosts who don’t know they are dead, we carried on haunting ourselves and each other.

We are a species capable of horrific acts and incapable of learning from the lessons our own history tries to teach.

Memories are shape-shifters, some bend, some twist, some shrivel and die.

Time is something my mother has forgotten how to tell. It moves differently for her now. Often backwards, instead of forwards. Dementia stole time from my mother, and my mother from me. I found this line very poignant. The issue of dementia always makes painful reading for me. In the book, Anna learns that her mother suffers from severe dementia.

We all have secrets. Some we won’t even tell ourselves

Sometimes I think I am the unreliable narrator of my own life.

The author does a great job of distinguishing the writing for Anna and Jack. Right in his first chapter, Jack makes his presence felt by telling us that: Since I left London, my job has been duller than a nun’s underwear drawer.

The characters were all drawn out well. Although I didn’t like Anna, she came across as too insensitive at the beginning, she did draw me into getting to know her story. Perhaps that was because of her drinking and resultant forgetfulness. In her first chapter, Anna can’t remember having baked the cupcakes that she is taking to work. I’m a little fed up of characters that have a drinking problem and can’t remember crucial events of their day.

The only characters I liked were Jack and, to an extent, Anna’s mother, who did everything she could for her daughter. I found Priya, Jack’s assistant, very interesting, not only because she is a character of Indian origin (Bonus points for showcasing diversity) but also because she is doggedly determined to pursue the case, even though she gives the impression of being small and helpless.

This thriller kept me engaged throughout. Each chapter ends on a cliffhanger, keeping us hooked. The author has successfully played out the themes of broken relationships, guilt and love, against the backdrop of murder.

The author does a great job of ratcheting up the pace and tension and creating a real sense of danger.

The description of the sex, while not graphic, is nevertheless disturbing. As are the descriptions of the murders which are brutal.

The only thing I couldn’t quite get a handle on was the murderer. Of course, why the person killed and killed again is explained very well, but how they could kill with so much brutality remains unanswered. I’m not talking just about the rationale, but how they went about it, which seems unbelievable.

This was my first experience with an audiobook. In this case, there were serious issues with the audio. I found that if I let one section (chapters were called sections, for some reason) end and the next one begin automatically, it would invariably skip one section in between. The best thing to do was to go through the navigation bar and manually click on each new section at the end of the previous one. This marred the experience slightly, during the first few chapters. It was only when I understood what was happening and figured out the trick, that the listening experience went on smoothly.

I liked Stephanie’s voice from the beginning. The pace, the enunciation, the pauses, they were all done right. Her voice was perfect for Anna’s narration.

Stephanie sounded so different for the parts spoken by the Thin Controller. It’s a subtle change that lets on that a different character is speaking but it makes such a great difference to the listening experience. I was particularly thrilled to hear the voice of recognition that she came up with when Anna’s mother, asleep in her home, wakes up and recognises her daughter.

Richard does a great job of distinguishing between Jack’s voice and Priya’s. Loud, he was Jack; a little muted, he was Priya, for the asides, the intonation changed once again. It was amazing how he switched voices at a moment’s notice.