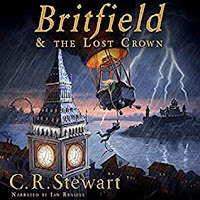 The book reminded me of a modern Oliver Twist, in so far as its beginnings were concerned. Like Oliver, 12-year-old Tom, the hero of this novel, is an orphan, one of many who are given a measly meal and assured of shelter in exchange for working hard in a factory that the owners of the orphanage own. For the Grievous family, the orphanage, Weatherly, is a good way to be assured of cheap labour to run their factories while getting a good subsidy from the government.

One day while smuggling out a book from the Grievous family library, Tom comes to know that his parents may be alive. He is determined to find them, but he won’t leave without Sarah, his best friend, who is in solitary confinement.

Staging a daring rescue of Sarah and a subsequent escape, Tom and Sarah escape in a hot-air balloon. They head to London in search of his family, armed with just one clue, Britfield.

They discover soon enough that the name Britfield is no longer welcome in England today. There is a dangerous history attached to it, and the danger is very much alive.

As they travel through Windsor Castle, and Oxford University, and a church, they depend upon the kindness of strangers to escape notice. And strangely, many go out of their way to help them. But Inspector Gallowstone (or is it Gowerstone?) is hot on their trail as is Speckle, a cruel supervisor from Weatherly. Will Tom and Sarah find out the truth about Britfield? And will they find his parents?

This was my third audio book. The best part of this book for me was the narrator, Ian Russell. He enlivened this book so much that I didn’t even miss reading for myself. His voice was pure magic. He succeeded in pulling off so many voices, including a Russian accent for a small piece of dialogue.

He even managed to hum and sneeze while remaining in character. The only parts at which I cringed were when he tried to speak for Sarah. It made Sarah come across as slightly dim-witted and annoying. A fact not helped by the fact that she wasn’t coming up with too many great ideas on her own and seemed to depend on Tom.

The book is filled with a colourful cast of characters, including Speckle, the supervisor, Mr and Mrs Grievous, Inspector Gallowstone and Professor Hainesworth.

But I wasn’t so sure about the hot air balloon escape. It was unbelievable that a hot air balloon might be available just like that, and that the kids would figure out how to use it, as if it were the easiest thing in the world, just by fiddling around with the levers and the knobs.

Unbelievably, it’s also running on a full tank, so they don’t need to re-fuel either. They spend the whole night in the balloon and come out unscathed, not needing to use the bathroom even after they land.

The fact of Tom’s identity was so obvious but nobody seemed to catch on.

Generally, I don’t mind cliffhangers, as long as they are tastefully done.  But here, I felt more than a little disappointed. The author has been saying that this is the first of seven books. I can’t imagine that there would be six more books before resolution comes.

The only reason I enjoyed this one was the narrator.

(I read this book through NetGalley. Thank you, NetGalley, the author and the publisher.)
Posted by Cynthia Rodrigues Manchekar at Wednesday, December 16, 2020