Book Review: THE SNAKE WHO WANTED TO BE A HORSE 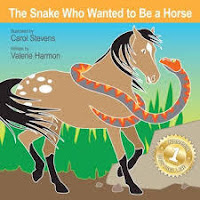 The Snake who wanted to be a Horse by Valerie Harmon is a sweet and unlikely story about a snake whose belly is sore from all the crawling that he has to do. He sees a horse, an animal whose stomach is so high above the ground that it never touches the ground. What’s more, Horse has such long legs that he doesn’t need to crawl either.

And so, Snake decides that he wants to be a horse.

He asks Horse for advice. Horse first tells him to eat grass for a week, and then when that fails, to neigh and whinny all through the day for a week. Both courses of action produce hilarious results.

La Niña and El Niño, who listened eagerly as I read this book aloud, laughed the loudest when these parts were read.

And then Horse recommends that Snake move from one place to another by lifting his body off the ground. You can imagine the challenge inherent in that advice for someone like Snake.

But Snake is determined to become a Horse, and will put himself through any amount of pain.

The illustrations by Carol Stevens are adorable and they give a good push to the imagination.

El Niño wanted to know why Snake wanted to be a Horse and nothing else. I had to remind him that it was a Horse that he had seen when he was dissatisfied with his own lot. From there, he wondered briefly what would have happened if he had seen an elephant, for example, or a peacock. He also thought a tiger would have been far better.

In the end, I wondered if Snake’s goal was realistic. Of course, I tell my kids that they can be anything they choose to be. But could a Snake change magically into a Horse?

Could you alter your genus? Trump your genes and become something totally impossible to achieve?

Snake does ultimately become a Snorse, part Horse, part Snake, ready to tackle the adventure of life with his friend, Horse, by his side to show him the way.

And as the kids clamour for an encore, I realize they’re too young to think about the unreasonableness of Snake’s desire.

Here Snake wants to be a Horse with all his heart, and in the perfect world of children’s fiction, that is what he becomes.