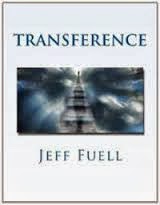 
Transference by Jeff Fuell is an easy and engaging read, and succeeds in keeping the reader's interest going.

The book starts from the viewpoint of the unknown villain, the man who wants the hero, who we haven't met yet, dead. All we know is that this bad guy works in an office and hates cell phones. This we know through a long and pointless rant about cell phones, which does nothing to fuel our interest either in the activities of the bad man or the book.

Thankfully, the pace picks up soon enough when the contract killer answers the phone and the villain asks him to bump off the hero.

Next the perspective shifts to the third person viewpoint of Michael, who has lost his wife to lung cancer and is busy trying to be a single father to his 13-year-old son, David. At work, he comes to know of large amounts of money being siphoned off to certain bank accounts fraudulently. He tries to inform his boss, Mathew, about this suspicious activity, and finds his boss anxious to get out of the office.

Suspecting that his boss is behind this fraud, Michael leaves office on a Friday evening, but is killed by the contract killer. He dies.

But that is not the end of the story.


He wakes up in the body of Tommy, his son's best friend who, following an accident, had been in a coma for three months.


Now Michael has a completely different set of problems to contend with. Not only does he need to get answers to who wanted him killed and why, and what happened to the real Tommy, he also needs to get ready to live life as a young pre-teen boy, without raising any doubts or suspicions in the minds of those who knew Tommy well.


But the search for answers will not only endanger the life and welfare of his own son, but also that of Tommy’s mother and sister.


Clearly, it’s not easy to be a young boy, particularly the second time around.

Fuell has done a good job of recreating dialogue. He also manages to make some good observations, "Nothing made people move faster than a clock that said quitting time on a Friday."


Bonus points to the author for handling the father-son sections so beautifully.

The character of Stacey, the younger sister of Tommy, is another treat. It is wonderful to see her precociousness and the spiritedness with which she offers to assist Michael in what is, from her point of view, clearly an adventure. She is mature beyond her age, and yet she is endearingly still a child.


I particularly liked the sections which take Michael back to school. The characters of Leland, the skinny hall monitor who is repeatedly thrust into a locker by sundry people, and another kid who suffers from a severe case of flatulence not only serve as instances of unique characters but also perform important roles in the story.

Transference suffers from the lack of grammar checking that is the bane of indie authors. For the most part, the language is clean, but clichés sometimes upset the flavour of the reading, as in the first chapter. Here, the killer thinks to himself: "Yes, he probably has an unusual lifestyle, one that I really do not want to know the ends and outs of, but still!"


I also encountered another slight error in continuity. After Michael is dead, he realises that he cannot see his own reflection in a glass door in the hospital. And yet, moments later, Fuell tells us that he looked at the door and saw nothing, but himself waving.

Aside from these minor quibbles, I thoroughly enjoyed Transference.

Fuell has not only succeeded in keeping the pace swift, he has also managed the difficult task of helping us to make Michael's quest our own.


(This post has been written for the Ultimate Blog Challenge, October 2013.)


If you like my writing, consider heading to the top-right corner of this page and clicking on LIKE to get notifications about new posts.