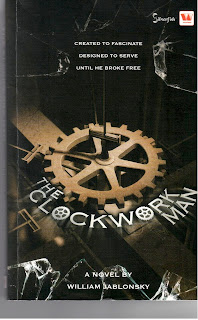 
Karl Gruber is a master craftsman and genius, a creator of automated clocks whose art and exquisite beauty has made him famous not only in his homeland, Germany, but all over the world. The zenith of his art is seen in Ernst, a man constructed entirely of metal and clockwork, with suede skin, glass eyes and a complex mechanical anatomy. Working on an internal system that needs regular winding and constant ticking standing in for heartbeats, Ernst is nevertheless imbued with human characteristics such as courage, sensitivity, intelligence and a strong disdain for violence.

Ernst lives with the family of Gruber, who he respectfully calls Master. The family consists of Gruber’s daughter, the elegantly beautiful sixteen-year-old Giselle, and son, ten-year-old Jakob, who is mischievous and sometimes spiteful. A housekeeper, Fraulein Gruenwald, completes the household.

The story emerges in the form of a diary, meticulously noted down by Ernst, with the permission of Gruber, and at the express request of a Professor Wellesley for the purpose of introducing himself to the academic community and so vindicating the art and genius that led to his creation.

In the Gruber household, Ernst lives his days, contented with the knowledge that he is of service to his Master. Despite himself, knowing well that he is not a human and may not aspire for such things, Ernst develops feelings for Giselle, who willingly leads him on. Their relationship, so unfathomably indescribable, becomes intimate.

Just as Ernst begins to believe that he lives in the best of possible worlds, tragedy strikes just days after Giselle’s 17th birthday. The family is devastated, the Master broken and led away to an asylum. Stricken with guilt and misery, Ernst begins to blame himself for the doom that has blighted their lives. Powerless to help the Master and unwilling to continue existing in a scenario where everything that was familiar and comforting has gone kaput, Ernst allows himself to wind down, an act that approximates suicide.

When he wakes up over a hundred years later and thousands of miles away from his homeland, the world has altered irrevocably. Gone is the genteel, slow and graceful way of life that characterised his memories of life with his Master’s family. In its place, Ernst encounters a world which is harsher, and, in many ways, completely incompatible with all his Master’s teachings. He seeks to make sense of this new world, while trying to come to terms with the realization that everything that was dear to him is gone.
In this endeavour, he is assisted by a slightly imbalanced vagrant named Greeley, who guides him around and teaches him the ways of the new world. Through it all, he never loses sight of his desire to learn more about what has befallen his nation and his Master’s family and to restore his Master’s reputation, maliciously damaged by the scheming inventor Edison.

At first I mistakenly thought the story was a reworking of the Frankensteinian tale, but Ernst, who enjoys reading the classics and has read Mary Shelley’s Frankenstein, shuns the comparison.

What I found slightly disconcerting was that despite being from another century, Ernst shows no great discomfiture at waking up in a world in which the values and mores that he was so used to have given way to attitudes that are debased. The fact that women in this century sport male attire, the fact that the language has altered so considerably and other changes, inevitable over the course of a century, arouse no special curiosity in him. Perhaps that is owing to the fact that Ernst is not human. A human might have balked, but not Ernst. He is, after all, made of sterner stuff.

The diary is written in a charming way, and at many places it is clear that Ernst has no mean sense of humour, especially when he talks about Greeley and his own experiences as a window mannequin. As you read through the pages, you find yourself feeling sorry for Ernst. You begin to understand the pathos and beauty that underpin his existence. The story of Ernst comes alive against the larger events that occurred in Germany and the world, namely World War II and the rise of the Nazis.

Despite being not-quite-human, it is Ernst's humanity and his kindheartedness that shines through the pages and stays with you long after you have finished reading the book. It is for these reasons that I would highly recommend The Clockwork Man to you.

This review is a part of the Book Reviews Program at BlogAdda.com. Participate now to get free books!